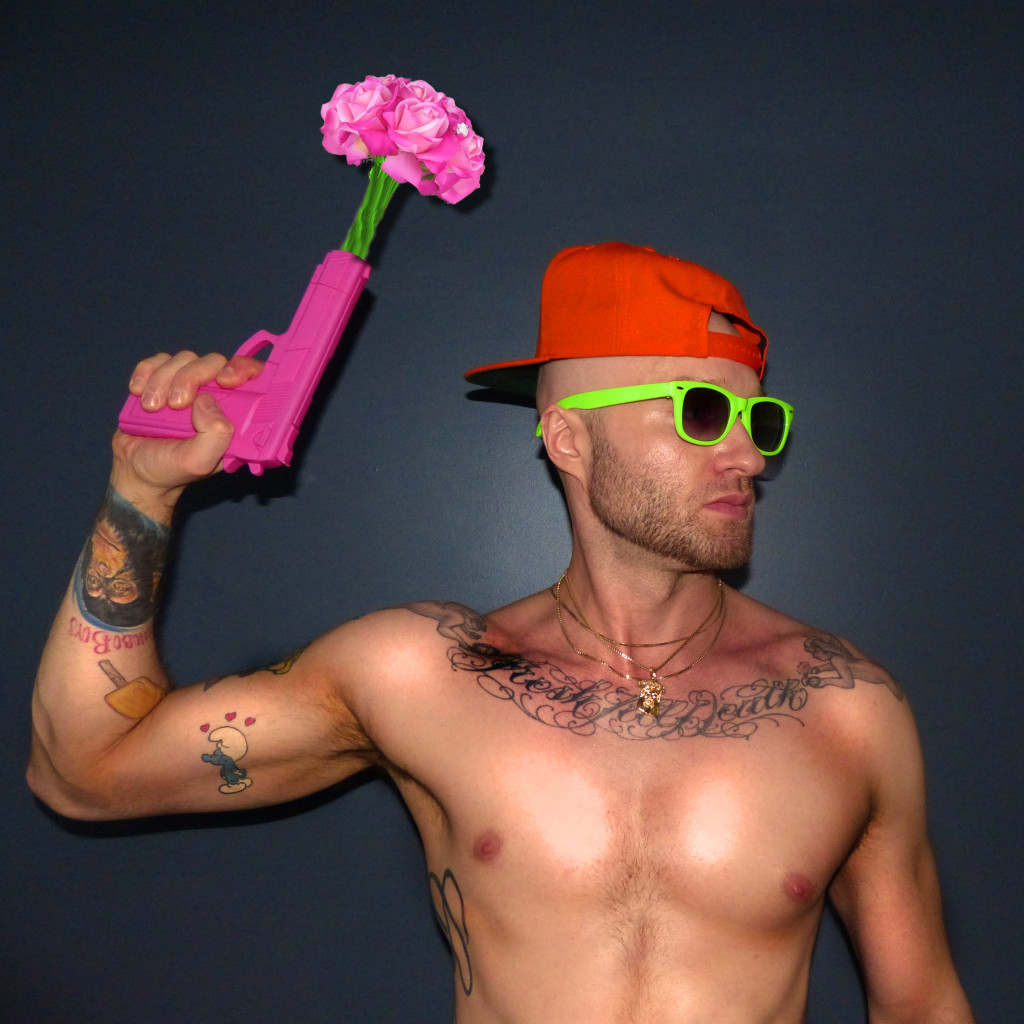 NYC based club stalwart Cazwell announces his highly-anticipated sophomore full-length album “Hard 2 B Fresh” released September 30th via Brooklyn-based indie Peace Bisquit. This not-so-random white dude gathers an impressive and illustrious list of collaborators include Richie Beretta (Major Lazer, Jillionaire), Justin de Nobrega (Die Antwoord), Nicky da B (Diplo), Peaches, Jesse Novak (M.I.A., Santigold), Big Dipper, RedTop (Beyoncé, Goldfrapp), Manila Luzon, DJ Fresh Direct and others to make for a ridiculously fun mix of electrified club music and old school hip hop.
Cazwell was inspired to write the title track, “Hard 2 B Fresh” while “getting fresh” at the legendary Russian Turkish Baths in New York City’s East Village. An old-school spa he often visits to “detox” and brainstorm new ideas. The rapper enjoys referencing comical and sexy situations he experiences when titling his tracks. Notable tracks on “Hard 2 B Fresh” include “No Selfie Control” – a song Cazwell wanted to dedicate to narcissists like himself and anyone who has been guilty of taking more than 4 selfies in a day, “Dance Like You Got Good Credit” featuring Cherie Lily (Andrew WK’s wife) which tackles the U.S. debt crisis – a situation Cazwell finds amusing because “we go broke trying to make ourselves look rich”, “Unzip Me” with Peaches – a track picked by the revered “Fuck The Pain Away” singer about getting a handjob at the club and “Guess What?” – the gnarly, horn-ridden electro collaboration with British pop star Luciana (Tiesto, Hardwell), that became a top 15 Billboard Club Play hit in the USA and UK. Earlier in the year, beat impresario and DJ, Richie Beretta produced Cazwell’s track “Helen Keller” – a term the rapper made up for when a person ex-communicates someone from his or her life (“I don’t see you, I don’t hear you, I’ve Hellen Keller’d your ass”) Don’t get it twisted, the Massachusetts-born Cazwell has proven himself a hard worker for sure.
He tours the world every year playing to enthusiastic crowds and festivals, has had over 10 million combined video views on Vevo / You Tube and has managed over 1 Million download / streams of his independently-released music. Earlier this year, he co-wrote the hardstyle anthem collaboration “This Is Your Life” for Dutch duo Psyko Punkz, David Guetta’s divo Chris Willis and the legendary MC Lyte. Additionally, of note, Cazwell’s “Get My Money Back” (from his debut full length, Watch My Mouth) was recently used for an HBO’s ad campaign for Eastbound and Down. From becoming a You Tube sensation after a million people viewed the ridiculously popular and oft-imitated “Ice Cream Truck” music video in a single week, to producing a steady flow of singles and videos that capture his engaging charisma, self-effacing humor and personality, Cazwell has earned credibility on and off the floor with a slew of anthemic and danceable hip hop tracks. This big ‘ol bag-o-tricks includes future hits like Latin twerk nugget, “¡Spicy!,””I Blocked Your Number,” the neo soul-laced “Cats and Dogs,” and Caz classics like “Rice & Beans,” the disco-sampled “All Over Your Face” and Courtney Love’s personal favorite “I Seen Beyoncé At Burger King.”
Cazwell’s new album, “Hard 2 B Fresh” impressively showcases his hypomanic yet insightful take on pop culture. We’re proud to present to you a musical force who has been described as “what would have happened if Eminem had grown up on Madonna’s front lawn.” “Dance Like You Got Good Credit” was the first video released from the album and has received over 100,000 views. The second video “Downtown” was recently released and already has over 495,000 views.
Cazwell also released “Hot Homo” – a parody freestyle of Bobby Shmurda’s “Hot Nig*a” which features Big Dipper. The music video to “Hot Homo” was released November 6 and now has over 315,000 views on YouTube.